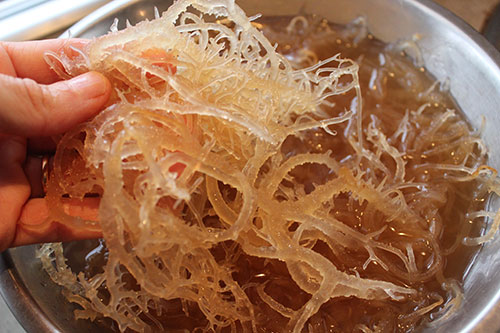 Did you know that Irish moss has a lot of health benefits? Irish moss or sea moss is actually not a moss at all but is seaweed. Also known as carrageen, Irish moss is a species of red algae that grows in the Atlantic ocean along the shores of Ireland, Europe, and North America.

It has been used for hundreds of years for medicinal purposes because of its antimicrobial and antiviral properties. Like other sea vegetables, it is rich in iodine and other trace minerals. It contains high amounts of Vitamins A, E, F, and K, calcium, potassium, iron, and magnesium. It’s known to soothe and aid gastrointestinal issues and inflammation such as ulcers or gastritis, and also increases your metabolism.

Clear Irish Moss (Sea Moss, Gracilaria) is great to use as a raw vegan substitute for gelatins and other thickeners. You can add it to homemade nut milks, ice creams, soups, sauces, and smoothies. Aside from the texture, Irish moss is tasteless once it’s prepared into a gel. You can make a batch of Irish moss in advance enough to add to your recipes.

Chef Tip:
Wash and soak a packet of Irish Moss 227g at one time. Blend the Irish Moss to a smooth gel. Use silicon ice cube trays to freeze the gel. Store the frozen cubes in the freezer in an airtight container or zip-lock bag. Using this method ensures that you always have Irish Moss ready to make great foods and desserts.